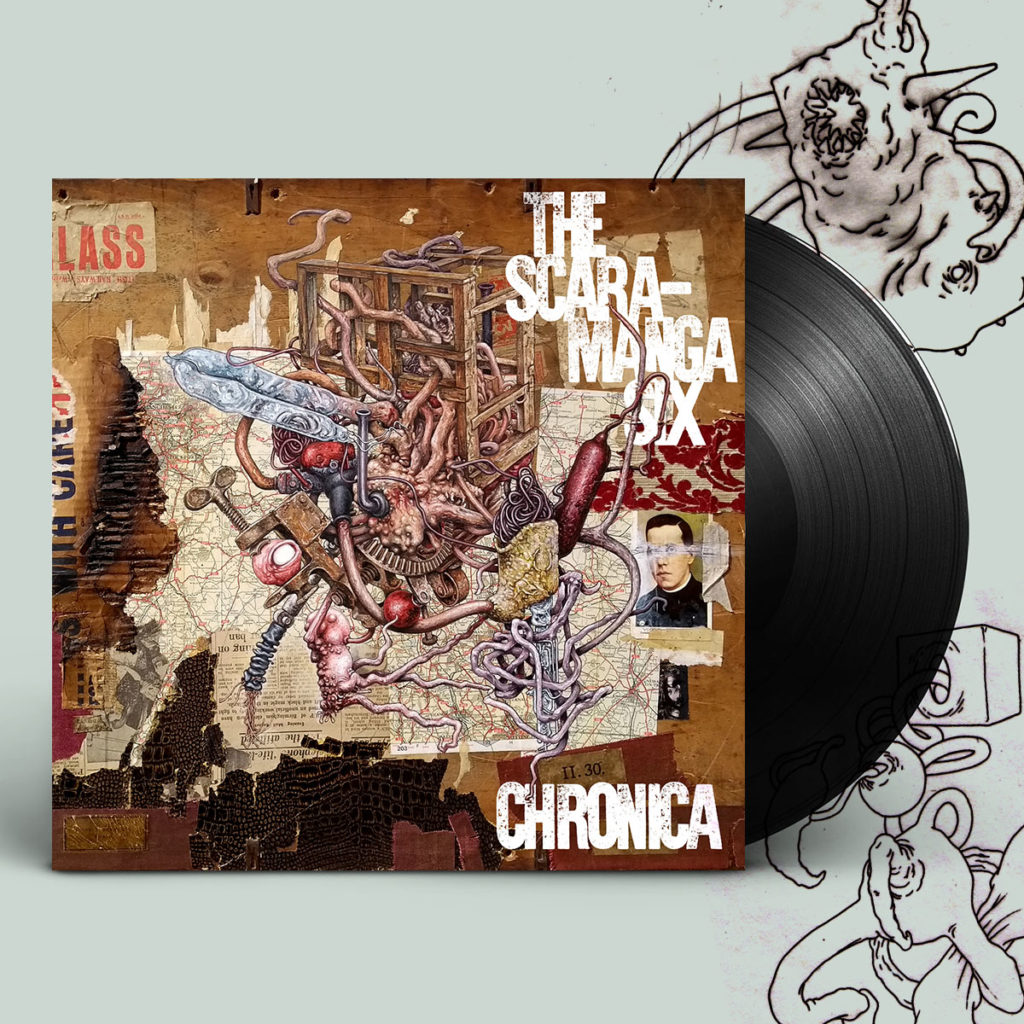 So here we are again. It appears we, THE SCARAMANGA SIX, have emerged from our murky hideout once more, our many busy appendages pumped full, old casings cracked and shaken away, hardened and hungry with abdomens bloated ready to burst forth.

Over the past year and a half, our irrepressible group has been back in Sheffield with engineer extraordinaire, Lord Alan Smyth (we did ‘Cursed’ and ‘The Terrifying Dream’ with him) galvanising a new arsenal of intense material that will come to form this, our 9th studio album. So much has been accrued of sufficient quality that we’ve finally taken the inevitable step of committing to a double-album.

The title of this work is ‘CHRONICA’ – containing an abstract story roughly hewn from a concept of a dystopian island society. A place where everything has fallen into ruin, yet people still seem to have the same preoccupation with the trivial crap they had before. The population trudge through a chaotic existence on top of each other with absolutely no hope of a better life. Society is reduced to its base behaviour yet people still crave superficial fixes. The human condition carries on regardless. There is no outcome, no lessons to be learned. Familiar?

This is our second foray into release through this magnificent PledgeMusic platform, following the hugely successful ‘The Terrifying Dream’ album/EPs/DVD campaign in 2015 which completely funded the manufacturing, post-production and promotion of the album. Flushed with cockiness, we have decided to up the ante this time round – we’re offering Chronica not only on digital download and CD formats, but for the first time ever we’re going to do a plush gatefold double heavy vinyl version, which as you all know doesn’t come cheap. There will be various bargainous bundle offerings, new apparel, unfathomable merchandising opportunities and personalised items of both affable and abusive natures. Along the way, we’ll also fling whatever secret crap we can find that will stick, all completely exclusive to those who pledge.

Once again we thank you for your patronage, and happy hunting for the second time.
Gareth/Julia/Paul/Steve
c/o
The Scaramanga Six